Have you heard of the website called puppies.com? if you have not, it is a site that allows you to find your new best pup friend. I came across this website when I was looking for a Siberian Husky puppy to join my family. When I went to their website, I was able to search for the breed, the age, and how much I wanted to spend on my new family friend. I typed in Siberian Husky, clicked search by state, and clicked on Arizona to see all the husky puppies in my state. 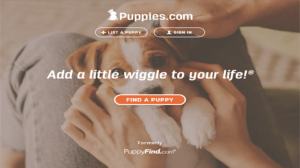 Since 2003, Puppies.com (formerly PuppyFind.com) has been linking people like you to the perfect puppy, from sellers across the country. With their breed matchmaker, find the perfect breed that fits all your lifestyle and personality needs. They believe that dogs of all breeds, shapes, and sizes deserve loving homes. Their adoption center is coming soon, but in the meantime, they are donating a portion of their profits to charity.

My Issue With The Site

I did some research when looking for my new forever pup, I came across the website of puppies.com to look for my Siberian Husky. I did the search for the breed, age and how much I want to spend, and what state I wanted to look in. I came across a profile called Royal Look this person had a few Husky puppies that I was interested in, so I contacted a person called Wanda J. I was messaging this seller about her puppies and if they were still available, and she informed me that they were all still available. 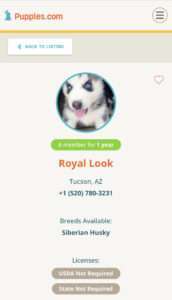 Wanda J asked me if I have ever owned a Husky or if I have a husky, I explained to her that I had a 3-month-old red husky baby girl and that I was looking for her a friend to play with. I had sent her pictures of my red husky pup, she stated that my pup did not look like she was 3 months old, I explained to her it was the picture that make her look older but to rest assured that she in fact was three months old.

We messaged back and forth about how to obtain the puppy, her profile on the website stated she delivers, I had asked if she could come closer to me, and she agreed to bring her to me but needed to fix one of her tires as it was running on a donut, that Monday, September 19th she would call me to set it up on Tuesday, September 20th. Monday came and gone, Tuesday came and went, Wednesday afternoon I text her asking her if she was still going to bring me the puppy, no reply. 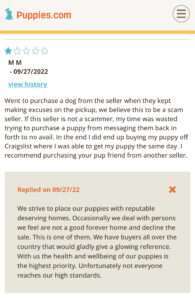 At this point, I had given up hope of getting my new pup, so I decided to look elsewhere to find a new husky for my baby pup. I came across a craigslist listing that had a few husky puppies left. I contacted them asking if they had any pups available, and they replied quickly as to yes they did. I did attempt to contact Wanda J from puppies.com about her puppy, and after a few hours, she replied that the puppy was still available. 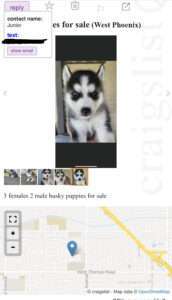 I asked her if the plan for the delivery was still on, but she did not reply, so I replied “I will have to pass on the puppy” her reply after 20 minutes was “OK” I just went with the breeder off craigslist who was much cheaper in price, although I had no problem with the price, they even delivered with me paying a delivery fee that I told them I would pay. I am happy to say that I now have two happy and healthy husky puppies that love each other so much.

My issue with puppies.com is that when I left negative feedback on the breeder’s profile, she disputed it and puppies.com removed my feedback, stating they only allow people to leave feedback on profiles who have purchased a dog on their site. I had explained to them I was purchasing a puppy when the breeder wasted my time and would not let me pick up the puppy as we agreed, that the breeder was a flake and might be a scammer. 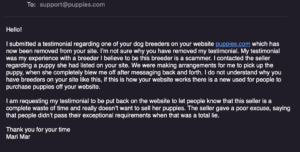 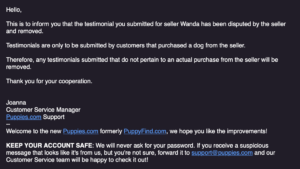 I do not recommend this seller, for puppies.com website, I suggest looking elsewhere, they will only remove your feedback if it’s negative. This site gets paid if breeders list and sell their puppies. When searching their reviews, they have many BBB complaints about the same issues I have had with this company, you can see them HERE. 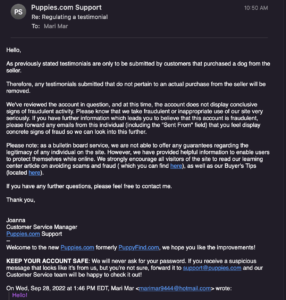 You can see by all the complaints this company has, I would not recommend purchasing your fur friend off this site, but if you do I would definitely look at the reviews and make sure they are not fake. Remember this site removes the negative reviews from the site.

If you look at her reply, she states that she holds a standard in placing her puppies in a good forever home, yet she never met me but the week before we were talking she was happy to place the pup in my home. Her response was just outlandish, If she had so many people all around the country she sold puppies to, why have they not left good feedback for her, Hmmmm! I call that a scammer.

I just want to put out there that the sellers on this site might be scammers to beware of them because puppies do nothing to intervene when there is a scammer amongst the breeders, giving the good breeders a bad name.

I have received an email from puppies.com informing me that my account was suspended due to terms and conditions because I reported the seller’s listing. I had explained to puppies.com that I did make a day and time with the breeder to pick up the pup, but the breeder did not return my call because I later found out she had upped the price of the pup. It seems like if you report the breeder with the company puppies.com, about the integrity of the breeders, they will just suspend your account.

In my opinion, I would not use this site at all if you want a healthy puppy, there are many other sites online or in your local area that is much safer and you will not have to deal with all the mess I had to deal with. Thankfully I had another option to purchase my fur-friend, and I am so happy with the breeder I went with to get both my healthy Husky puppies. I was skeptical about using Craigslist because of the bad reputation it has, but to be honest, I had no problem at all with the two different breeders where I got both my baby huskies. So I recommend not using puppies.com to keep you safe from a spamming company that allows scams to happen on their site, they turn a blind eye to this. 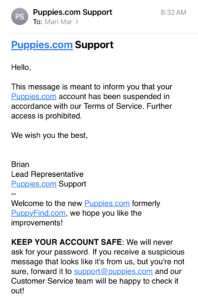 The names of my new fur buddies are Ginger who is the Red Husky and Mika the Black and White Husky. 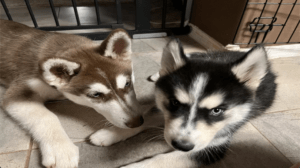 Turn A Plain Cake to An Among Us Birthday Cake

Samsung Galaxy Note 10: Prior to deciding to pre-order the Samsung Galaxy Be aware 10 Plus you have to know it’s a large phone, also it includes a suitably large price. It’s among the highest-specced devices you can purchase at Read Full Post