How To Save Money Shopping from your biggest online retailers like Sams Club, Walmart, Amazon, and eBay. It came to me when I needed to do some shopping for some items I needed for my home.

When I was looking to purchase some Gain Laundry pods from Sams club as they have a good deal on 130 pods for around twenty-five dollars. I also needed some Downey fabric softener pods and a big pack of bars of soaps. 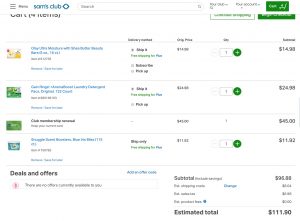 I went to Walmart’s website to find the same items and to see how much it would be including the taxes. This was my finding from walmart.com, for the laundry pods I would have to order two of the items to match with the Sams Club pod count, plus I needed to order two of the snuggle boosters because they only had a pack of 56, Sams Club has 115. When adding all the three items in my cart from walmart.com, my total was $77.73 plus tax ($82.63) 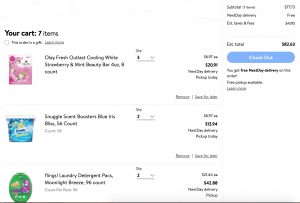 Now! for the same items on amazon was a different price as some items were cheaper than Walmart. The laundry pods were $21.44 for 96 pods, so I would have to double up to make the same count as sold in Sams Club, next was the Snuggle Boosters, you would get 115 pods for $11.92, if you subscribe to the company and have more delivered to you, you could save an extra 5 – 15% off your order. For the bar of Olay soap, the price is $20.99 when adding all the items in my cart the price was $75.79 plus tax ($82.76)

To Save Even More Money

To save more money online was to purchase a few items from Amazon and others from Walmart.com. There were items on Amazon that were cheaper than Walmart, and some at Walmart that was cheaper than Amazon.

So this is how I saved on my order, I purchased two of the Gain pods from Amazon and I purchased the Snuggle Boosters from amazon, I only had to purchase one as it had the bulk pack of 115 pods in a box. The last thing that I needed to buy was the 2 packages of 8 bars of soap, which I purchased on Walmart because it came out to be $13.97 for the two packs plus taxes it came out to be $15.22.

How To Save Money Shopping Total Savings

When looking at the numbers on paper, you can see that Sams Club was not a better deal. Getting two of the items, not only gave me more laundry pods but I saved money in the end. You can already see by purchasing a membership from Sams Club, you are already in the hole of $45 plus tax  ($48.24) which could have gone to purchasing from Amazon or Walmart.

New Calculations How To Save Money Shopping

We all know that ordering from Amazon would be the best choice if you have Prime because it will give you free shipping on all your orders among many other perks with the membership. If you are like most and do not want to pay a membership price than Walmart would be the best choice to purchase your shopping as there are no fees to shop. But if you are like me, and have Prime for all your deliveries and free music, movies and much more, than this would be a top choice to purchase your online shopping.

If you are on government assistance and want to join Prime, you can do for half the price, its $5.99 a month for those who have state medical and or nutrition assistance.

Now that it is the cooler season, why not sit close to a nice fire pit while entertaining outside your backyard and enjoy a nice warm fire? This fire pit is a nice way to enjoy your outdoor setting with Read Full Post

CoosII H300 wireless bluetooth headphones with a built in microphone are a great pair when you use for extended period of time without hurting your head and ears. Hassle-free wireless headphones with long battery life makes everything easier. The music Read Full Post

Drama Live is an Android APK that offers tons of live tv content. You will get entertainment from many countries within a single app – Pakistan, India, Bangladesh, Afghanistan, and many others from all over the world. This application is Read Full Post