Nvidia Shield Android v9.0.1 has finally come and Nvidia Shield has pushed a new update to its Android box. There are many different updates to current Android apps. With this update, many bugs have been fixed to address any issues you may have had with previous versions, plus more added games and an update to the Plex service. 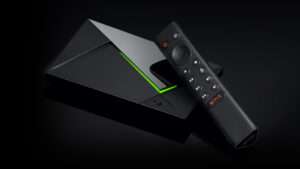 Stream free movies and tv shows on plex, with this update you will get the latest update from plex. With the newest update from plex, you will receive more movies to watch that are on the plex server. If you are like me and love watching movies and tv shows, this new version allows you to watch more from the platform even if you don’t have a hard drive connected to your plex server.

Bet+ is a premium subscription streaming service with over 1,000 hours of your favorite movies and tv shows like First wives club, Bigger, Martin, and Meet the Browns.

is a new game that has been added to the Nvidia Shield. Jack Box Party 6 is a wild party pack with five hilarious new games including Trivia Murder Party, Dictionarium, Push the button, Joke Boat, and more! 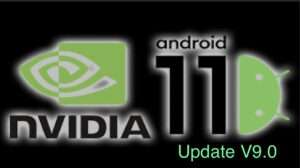 Get in gear and take on the world’s best, most fearless street racer pros to become the next Asphalt legend from the creators of Asphalt 8 Airborne.

This game is a free addictive classic brick breaker game with hundreds of challenging levels and a variety of items. There are many more games that have been added to the Shield.

Other enhancements that have been added to this update included support for the new Xbox Elite 2 controller and support for the Sanscript USB DAC. Channels DVR app can now store recorded content on NAS. 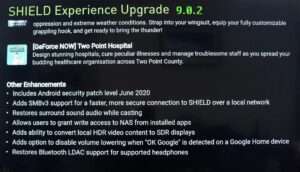 Channels DVR app can now store recorded content over NAS. Resolves issue where “Match Color Space” was not working properly on some TVs. Fixes bug where screensaver would not be displayed in Netflix.

Resolves issue where pre-installed apps would disappear. Fixes stability issues when connecting to SHIELD from a PC over the network. Resolves issue, where SHIELD LED, doesn’t pulse after voice command, after enabling that setting.

My Thoughts on Update

Coming from the last version, I had problems with my shield always turning off and coming back on. In this version 9.0.1 update, I have as of yet not experienced this turning off issue.

For more information on this update, you can check the Nvidia Shield website to see all the added features and fixed bugs with this version update.

If you don’t know about the Nvidia shield, or how it works, it’s an Android box that allows you to stream movies and tv shows as well as live tv for free on this box. The version I upgraded to was the Mini, but there is an older Nvidia Shield version.

For those who use the Firestick, this would be a big upgrade to what you are used to.

Resolves issue where the screen would be rotated 90 degrees

Fixes Kodi bug where SHIELD TV app, Control4, and other remotes would not work properly

If you like this Article, make sure to Bookmark my website to save for feature reference
Spread the love